Typically I always hold 2 student concerts per year – one in December and one towards the end of the Summer term.  They are highlights of the year for me and my students.  Performing provides each of the students the opportunity to prepare a piece of their choosing to a high standard.  As many of my students choose not to take formal exams, the opportunity to perform provides an alternative focus for their playing.  And it’s a great boost to their confidence.

Many of my students also enjoy composing and arranging and the twice-yearly concerts also provide the chance for them to perform their own work.

Due to the Covid-19 crisis, it was not possible to hold my usual Summer concert.  However, my students had all been continuing their weekly lessons on Zoom and I wanted to give them the opportunity to prepare for something special as normal.  So I asked each of them to record a video of them playing a piece of their choice, and put together a video of all the performances to share with them and their families.

It was not the same as a real concert – but it was better than nothing.  And it provides us all with a momento of the past few months – where the music has continued, even as much of life has been put on hold.

You can watch the full concert here:

On Saturday 6th July 2019 I held my 10th student concert.  My twice-yearly concerts provide an opportunity for all my students to perform to a friendly audience.  Because many of them don’t take formal piano exams, the concerts provide an alternative goal for them to aim for, preparing a selected piece or pieces of their choice to a high standard.  Unconstrained by the requirements of an exam syllabus they are able to select any piece that they like and, most importantly, motivates them to play!   Often they will be keen to learn a piece from a film such as Nathan, 10, who played the theme from Jurassic Park:

Both Nathan and Daniel found good arrangements of these pieces in books.  However, Dan, 11, chose to arrange his chosen song – A Million Dreams from The Greatest Showman – himself, using a few different arrangements he found online as inspiration:

Pop songs are also a popular choice for my students.  I try to discourage them from using sheet music arrangements of current songs as sometimes such arrangements can be of variable quality.  However, lead sheets – which provide only a melody line and chord symbols – can be a great way to learn the basics of a song whilst allowing for a creative interpretation of the core ingredients.  Luca, 13, used a lead sheet to create his own arrangement of Coldplay’s Clocks which also contained his own improvisations based around the chord progression:

Gabriel, 10, also used a chord progression from a famous song; but rather than use any aspect of the actual melody he used this chord progression to create his own piece.  He challenged the audience to see if anyone would be able to recognise the song but because he had changed it so much from the original (John Lennon’s Imagine), no-one was able to identify it!

There were also a couple of debut performances including this from Jago, 4, who played I Like Coffee – a wonderful and very popular rote piece.  Do make sure you check out the look on his face when he takes his bow at the end and realises everyone is clapping for him!

Sophia, also 4, was playing in her second concert and performed her version of Mary had a Little Lamb – she had worked out how to harmonise this herself:

I love to play duets with my students.  Here’s Myla, 6, and myself playing Broadway Star:

And Izzy, 11, and I playing Simple Samba:

These twice-yearly student concerts are a great opportunity for my experienced students to prepare a chosen piece to a high standard and for some, to perform their own composed or arranged piece.  For my new and very young students it’s a lovely way to boost their confidence and provide them opportunities to perform in a friendly and informal setting.  For me, it gives me a wonderful opportunity to look back on previous performances and see how my students are growing and developing both as pianists and as people.  I’ve now hosted 10 concerts and plan to host many more – watch this space! 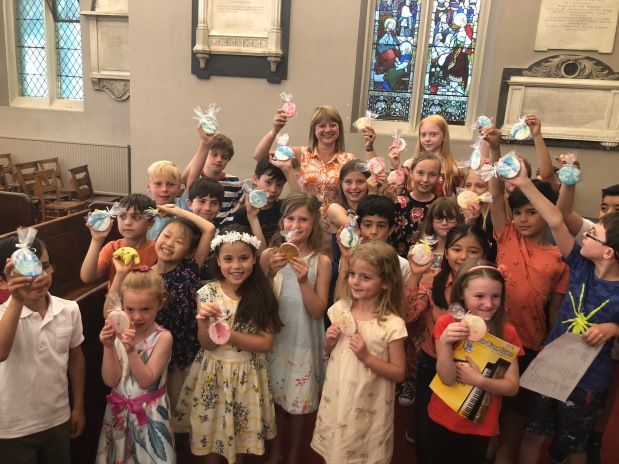 I’ve been holding my twice-yearly concerts for nearly four years now. In the earlier years, I didn’t always record the performances although I have now started doing so. It’s lovely to watch them back and see how the students have developed over the years. Luckily, however, there are some recordings of performances at the earlier concerts so I have been able to look back on some from July 2015 and see how the students have developed since then, as seen in the videos from my latest concert on 30 June 2018. For starters, here is Nathan in July 2015, then 6 years’ old, playing 2 pieces including his own composition:

And here he is three years later, age 9, playing Little Prelude in C by JS Bach……

Keiva was only just 5 years old when she played here at her second concert:

And here she is, at 8, playing the wonderful Emerald Green by June Armstrong:

Here’s Daniel playing at his first concert in July 2015 when he was 6:

And three years’ later he performs his own composition The Easter Blues:

Izzy was 7 when she played Plain Sailing by Rosa Conrad at her second concert:

And at the age of 10 here she is introducing and playing her own ‘untitled’ composition, and challenging the audience to see if they could tell what it was about!

I often bore friends and family by saying I have the best job in the world. But I really do. And watching my students grow and develop, not just as pianists but as young people, is a real privilege.

To Miss with Love

The resuscitated thoughts of Katharine Birbalsingh, Headmistress at Michaela

Music and Films with Dexter

The sensory pleasures and earthy delights of gardening.

The gardening adventures of a Piano Teacher with cats in a small garden in SW London......

The Way of Piano

Sharing The Joy of Music

ideas about music, and about playing, learning and teaching the piano, with unexpected extras

How can the iPad and Technology enhance Music Education?

The latest news on WordPress.com and the WordPress community.

thoughts on piano teaching and beyond

Piano Teacher in Teddington for Early Years, Adults and Everyone in between

Piano Teacher in Teddington for Early Years, Adults and Everyone in between

Music Matters Courses for all